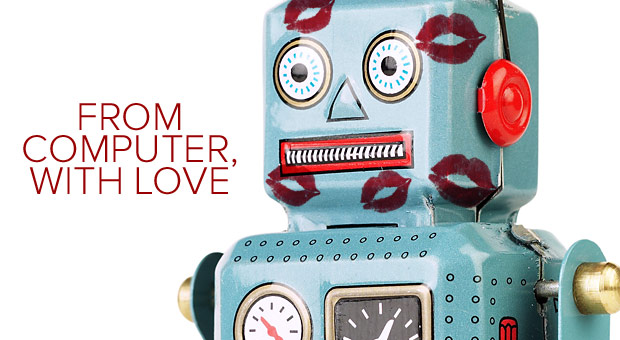 Recently over happy hour drinks, I sat listening to a friend of mine discuss her sudden weight loss. This was by no means extraordinary, but what was interesting was exactly how she chose to talk about it. Attributing her new slimness to a recent job change, she stated, “sitting and staring at the computer used […]

Recently over happy hour drinks, I sat listening to a friend of mine discuss her sudden weight loss. This was by no means extraordinary, but what was interesting was exactly how she chose to talk about it. Attributing her new slimness to a recent job change, she stated, “sitting and staring at the computer used to be my default setting, and now, I’m constantly on the move.” The phrase “default setting” jumped out at me, and as I began to break it down, I realized the complex semantic underpinnings at work. The opposite of personification or anthropomorphism, my friend crossed into new terrain, likening human behavior and consciousness to that of conventionally inanimate, yet not entirely lifeless, technologies. And she was totally comfortable, if not eager, to make this comparison.

Consider a few more examples. Often after a hard week at work, I tell my family and friends that I’m taking the weekend to “unplug and reboot.” Sometimes, during an especially dry film or conference, I check out from the present moment and go into “sleep mode.” Off the top of my head, I can think of at least three instances this week of someone telling me they’d like to discuss something “offline.” And I’m sure that you can think of dozens of similar tech-come-human phrases appropriated in your daily conversations, too.

I think these examples signal a very important shift, if not transcendence, in mainstream consciousness. Gone is the era of hysteric technophobia. In its stead, a new age of cuddly techno love and acceptance is dawning. And what’s particularly interesting is our willingness not just to accept technology, particularly computers, but to empathize with them. At some point, we began to see a likeness in our own consciousness, a familiarity of being. That’s a radical change.

Arguably, computers and other technologies are engineered to mimic human brain processes, or at least what scientists think they understand about human brain processes. Therefore, one could purport that it’s only natural people adopt those words and phrases traditionally set aside for computers, sensing a likeness in their own brain function. It’s a solid counterpoint, but narrow-minded in the sense that it doesn’t honor the emotional pains taken to achieve that sense of familiarity.

Feeling at ease with technology didn’t happen overnight. It took decades for humans to develop benevolent feelings toward computers and hours of one-on-one time to seal the deal. Certainly not everyone is hip to this trend, but the mainstream has spoken with a voice that doesn’t get ignored. The new non-geek computer speak comes loaded with technological innuendos and reveals our true sentiments, one flippant happy hour conversation at a time. We like computers. They’re like us. And together, we’re gonna share this state of being.

This new dawn we’re witnessing really excites me. I believe it means that people have opened up that warm, lighthearted, and fuzzy side of themselves that was traditionally locked away from technology. It’s a new dimension in the collective consciousness, full of empathy and richly emotional, that’s begging for creative word play and fun.