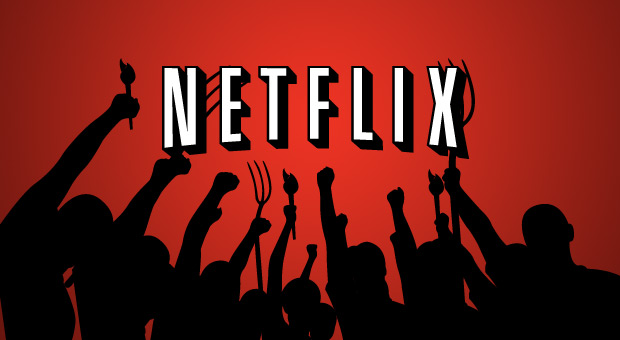 Much has been made over the last few weeks about Netflix’s announcement that prices would be increasing: unlimited streaming and unlimited DVDs (one at a time) combined in one plan has gone up from $9.99 to $15.98, or you can get either for $7.99. Netflix was always seen as a trustworthy underdog, cutting-edge and young. […]

Much has been made over the last few weeks about Netflix’s announcement that prices would be increasing: unlimited streaming and unlimited DVDs (one at a time) combined in one plan has gone up from $9.99 to $15.98, or you can get either for $7.99. Netflix was always seen as a trustworthy underdog, cutting-edge and young. The Apple to Blockbuster’s Microsoft. But now, people are mad. Many feel the price increase is too steep, too soon, and with no major additions to the streaming library, too unjust. Has Netflix become everything it once set out to destroy, or at the very least, that we hoped it would destroy?

The reaction online – Twitter, Facebook, news sites, and seemingly everywhere it was covered – was pretty vitriolic. Here are some selections from the Netflix blog (grammar kept in the posts’ original form):

Individually your DVD and steaming services do not offer enough to justify their expense. As a bundled service they supplement each other and provide the value that made Netflix wonderful. DVDs allowed you to view newer releases in a fairly timely manner. Streaming allowed for viewing of the older catalog of movies that come up when you think of it but might not be worth waiting for to arrive in the mail.

I average 5 DVDs a month. I can replace these rentals with RedBox for $5 and save $3 based on your subscription prices. This replacement would also remove the 28 day wait that comes with most new releases available through Netflix. Likewise, I can replace your streaming service with Amazon Prime and save an additional $2 a month. Again, this would eliminate the unnecessary delay in availability of newer releases.” – Willie Williams

“Dear Netflix,
After 3 years, I’m sorry but it’s over. If I switch to blockbuster I will have a greater streaming selection, with newer movies, plus games, and it will cost me only 75% of your new rates. Its been great, but its over. It’s not us, its you. Enjoy the bankruptcy.” – Adam Lundquist

“You can spin this any way you want, Netflix, but it comes down to simple greed. With limited new content on your streaming service, I will be definitely be canceling that and will probably cancel DVD service as well just on principle. Time to sign up for Hulu Plus! Go ahead and change your name to Blockbuster, because with more stupid decisions like this, it’s only a matter of time before you go by the wayside like they did.” – Anonymous

And now some comments from The Onion AV Club (again, grammar kept in its original form):

“Their streaming catalog isn’t nearly vast enough to justify dropping the physical disc aspect of the service. There’s too much content only available in disc form, including most new releases. People aren’t going to go for a streaming only service until they add more worthwhile content.” – realmike15

“we can start our own company! we’ll call it Webfilmz. we’ll be the little guy at first, pounding the pavement for sales, but with lots of hard work and luck, our plucky company would succeed in bringing affordable entertainment to everyone!

then, once we have the trust of our clients, we can jack up the prices and live like kings! it’s the american dream!” – Or

“I, for one, have decided to switch to gulp Blockbuster Online for Blu-ray rentals and Amazon.com for streaming. You can join Amazon Prime for $79/yr and basically get the same old crap that Netflix streams plus you get free 2-day shipping from Amazon. I’ll still come out a few dollars ahead of the new Netflix rate.” – The Jewish Brad Pitt

My opinion? The price hike is annoying, but it’s no reason to storm the castle in the way we’ve seen. $15.98 isn’t a bad deal for the selection provided; in fact, while it’s 60% higher than what we used to pay, it’s actually still a pretty good deal. I can catch up on Breaking Bad via discs, while at the same time stream every season of Futurama, weird Troma horror movies, and Wet Hot American Summer whenever I want, for less than what I pay for HBO and HBO On Demand? That’s not bad. As Willie Williams mentioned above, I can combine different services to save a couple of bucks compared to this new pricing structure, but A) I’m too lazy for that, B) the convenience of having it all come from one place outweighs the money I’d be saving, and C) I can stream Netflix on my PS3, which I do almost daily. Plus, I still like the company. I don’t think Netflix has gone to the Dark Side yet (I blame the cost of shipping and the movie studios as the main culprits in the price increase) and when this all gets to where it’s going – a complete, streaming library – my hunch is that Netflix will be leading the pack in terms of content and affordability. They’re really the ones who’ve led us this far, and I still respect them for offering an easy, enjoyable alternative to the old ways.

So, I’m still on board with Netflix. Just so long as they don’t remove Futurama from streaming. Then I might have to grab my pitchfork (which is weird that I have one, considering I live in an apartment in Brooklyn).