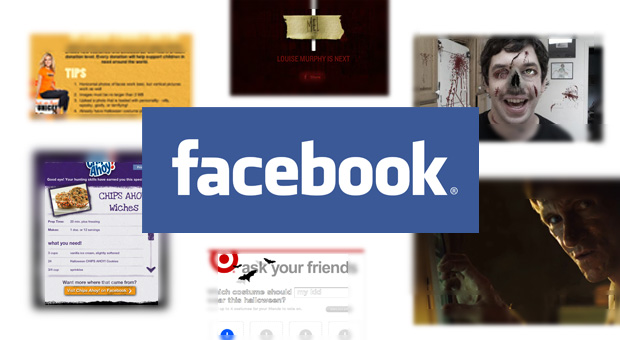 Halloween is one of those holidays that allows brands to be just a little more creative, and honestly, a little more fun than they usually are or can be. With the rise of Facebook, many companies use Halloween to present their products in new ways that call on user interaction and clever ideas, which show […]

Halloween is one of those holidays that allows brands to be just a little more creative, and honestly, a little more fun than they usually are or can be. With the rise of Facebook, many companies use Halloween to present their products in new ways that call on user interaction and clever ideas, which show that A) these brands do have a sense of humor and B) they’re cooler than you thought they were. Below are five favorites by brands (actually, four are by brands – one isn’t linked to any product or company, but it was just too good to leave out) that captured the spirit of Halloween and built intuitive apps to support their creativity. Selected by Flightpath’s John Whitcomb and Dan Brooks, in no specific order.

Take This Lollipop – Let’s kick off the list with a bang – or in this case, a little stalking. This site has quickly become a viral sensation with its clever use of the user’s personal information and profile, playing on our fears of the big bad Facebook man watching our every move and ignoring privacy concerns of their users. After all, this is Halloween, and no fear should be left unturned.

Connect to this application and you are quickly transported to a dark hall of some creepy building. In it we find the main character, who is clicking away on the Internet. He decides to login into Facebook, but not as himself…he logs in as you! As he goes through your profile and glances at images he slowly starts tweaking out. A map is displayed of your house and he turns towards you with an evil grin on his face. Next, he is driving to what is supposedly your neighborhood with your profile picture pinned to his dash.

The best part about this whole experience is that it has nothing to do with marketing – no brand is attached – it is simply the sick and twisted mind of an individual who knows how to turn a social network into a “scary network.”

Mike’s Hard Lemonade: Zombifier – There are few things I love in this world more than zombies. Whether it’s The Walking Dead comics, George Romero’s films, or the Resident Evil games, zombies occupy a surprisingly large percentage of my entertainment pie chart. But I don’t like bad zombie stuff; I’m picky with my zombies. Also, since we’re here to talk about Facebook, it’s worth noting that I’m quite selective about my corporate Facebook likes. The last thing I want is my Facebook feed filled with junk messaging from brands I don’t really care about.

So it probably speaks pretty highly of Mike’s Hard Lemonade that I converted to “liking” its Facebook page just to use its new Zombifier, which allows you take a photo of yourself and zombie it up with easy-to-use tools. What actually sold me on the like conversion was the great landing page image: a Zombified photo of a female fan that looked really, really good.

From there, I selected a photo I wanted to use, chose the right gashes, decomposed nose and decaying eyeballs, and I was done! Zombie Dan was posted to my wall and made into my profile picture in about two minutes. What I also really liked: the zombie photo was not branded with a Mike’s Hard Lemonade logo. It may not seem like much, but I appreciate that liking them was enough, and I don’t have to actually advertise the brand with my new photo. – Dan

Target: Get Gourdeous – The main reason I chose this campaign, besides the word play in the title, was because of its simplicity. A user uploads a picture, which is then placed on a virtual pumpkin. The pumpkin can then be posted to the wall of the user or sent to a friend and, voila! Customized Facebook Jack O’Lanterns.

Pumpkin carving is an activity that I look forward to every year, and now Target allows me to take that idea online. Now as long as no one smashes my virtual or real pumpkin carving masterpieces, this will make for a great Halloween. – John W

Unicef: Trick-or-Treat Costume Party – Not all Halloween campaigns have to be scary; some can actually be charitable, as this example from Unicef shows. Their Trick-or-Treat Costume Party campaign is a great way to not only have some fun but also help out a great cause as well. Users upload a photo either direct from Facebook or their computer, and then use the costume creator to see what various costumes look like superimposed on their photo. The charity part comes in with a great and simple tie-in from the organization, where for a small donation amount, more costume choices are unlocked.

There is also the shareability factor built in with messaging and the ability to share the photo to your wall, or make it your profile image. Additional options such as hosting a Halloween party and other things you can do to assist the organization make this a treat for them and you – with none of the tricks. – John W

Kraft Foods: Halloween Hunt – This is a basic tab/landing page, but it’s really effective and contains more content than one would think. On the page, you’re looking at a classically spooky, cartoonish haunted house in the moonlight, complete with a grave in the front lawn and other details that you don’t see until you look deeper. Your mouse turns into a skeletal hand, and as you move it over different objects, things pop-out and animate. Click that pie in front of a tombstone, and zombie hands reach out from the ground, followed by a quiz about Jell-o popping up. Get the quiz right, and you win access to a Halloween-themed recipe. Click on Kool-Aid Man, who’s staring out of one of the windows of the haunted house, and he flies away, dressed as Dracula, while a different quiz pops up.

I like the well-produced Disney-esque music and monster groans and grunts (and I usually hate the music and sound effects with these things), the basic-but-fun animation, and the interface. But I really love the way it encourages interaction and exploration in an exciting, simple way. Really well done. – Dan