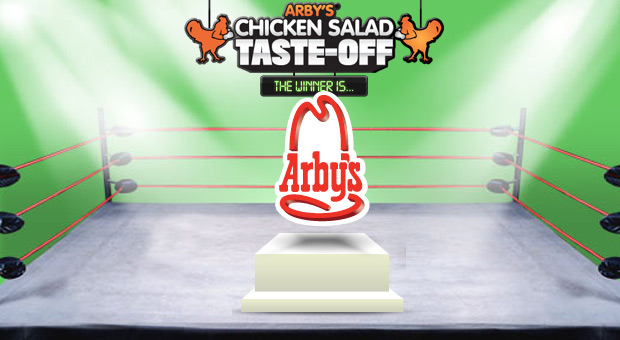 Welcome to Facebook Fridays, our new weekly feature where we look at various Facebook marketing campaigns, and examine what went right, what went wrong, and everything in-between. First up: Arby’s “Chicken Salad Taste-Off” campaign. How do you launch a new product offering to the masses and utilize social media to help you gain buzz and […]

Welcome to Facebook Fridays, our new weekly feature where we look at various Facebook marketing campaigns, and examine what went right, what went wrong, and everything in-between. First up: Arby’s “Chicken Salad Taste-Off” campaign.

How do you launch a new product offering to the masses and utilize social media to help you gain buzz and trial?

The Campaign:
1. Like gated coupon was given to consumers for the new offering from Arby’s.
2. Consumers were encouraged to try both sandwiches and return to the page to vote for the one they liked best.
3. In order to encourage voting, Arby’s partnered with Share Our Strength’s No Kid Hungry campaign and pledged to donate $1 per vote, and up to $25k, to the charity partner.

The Results:
The campaign recently ended and one of the most glaring results was that Arby’s was unable to achieve their goal of 25K votes. The total vote count, according to the Facebook page which housed the application, was just under 10,000. The good news for Arby’s, however, is that their sandwich did receive over 80% of the votes, making it the clear favorite. (Big Surprise there.)

The impact on the page does seem to be pretty significant, with the total number of Likes increasing by 58% from 323,600 to over 510,000 in just the 12 days the campaign was active (according to monitor.wildfireapp.com).

What Worked:
There are a few significant things that worked about this campaign:
• Simplicity of offer: A Like gated coupon is a great way to help build a fan base. It is simple for a user to do, and also gives them a reward for this simple action.
• Buzz worthy: Arby’s could have easily designed a landing tab for the coupon and any new fan who liked them would receive the coupon, but left out the challenge aspect of the campaign. By throwing down the gauntlet and directly challenging the competition they created significant buzz around the event.
• Support: Arby’s also conducted a blogger outreach campaign to coincide with the launch and pushed the story through traditional media as well. This integrated campaign promotion helped drive the results.

And ultimately, the huge increase in Likes was a big win for Arby’s. That alone makes the campaign a success from a marketing perspective.

Where It Fell Short:
The campaign was successful by most measures in helping to drive awareness and trial of this new product, but where it was lacking was in the continued interaction they were requesting from the consumers. To ask someone to not only visit for your offer once, but then return and re-engage, is a tough task for any brand and one in which Arby’s missed the mark.

Takeaway:
The biggest takeaway is to make sure your goal is tied to a simple action from your fans. If you make things too complicated or ask them to take multiple steps, you will naturally decrease your conversion rate, as you lose those who just don’t have the time to complete the second action. By trying to tie your end goal to a single simple action that a user can take, you are more likely to increase your conversions and the engagement with the brand.