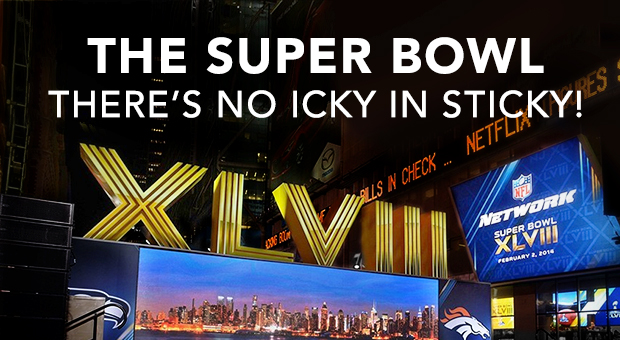 No, it’s not just the massive eyeballs that come with Super Bowl ads and posts each year.  Spending $4 million bucks can quickly aggregate a lot of eyeballs by any number of “road-block” media strategies on and off-line.  But that’s not it.  Watching adult people running to get their photos taken with Denver and Seattle player “standees” in Herald Sq. and seeing teens running after a living football player for “selfies” brought all the optical clarity one needs to understand the Super Bowl’s gravitational pull.

The Super Bowl is the “stickiest” thing in America. The stickiest thing ever created in our country.  And, it creates a stickiness for any and all things attached, associated or aligned with The Big Game.  Just ask Bruno Mars or his agent.  Plus, the Super Bowl is made and still played in America- even as it expands its global reality. Love French food, Italian fashion, German cars… but the Super Bowl in NYC (no less and way more!) is so us, so USA, USA, USA! Excitement personified.

Year after year where ever it goes, the Super Bowl dominates the media for practically two weeks. The President is even part of the stickiness, joining forces with the Super Bowl pulpit/telecast – even on Fox – to bring the country (car and truck buyers, beer and soda drinkers, website “URL” hunters) together.  And, at the end of the Super Bowl Sunday, its broad stickiness is deeply rooted in the emotional connection it fosters and creates among so many of us.  That’s worth watching and paying for!

So, even though I have viewed the Best Buds dog and horse spot personally 1.5 million times, I still can’t wait to down it with some wings and friends on Super Bowl Sunday!!

Editor’s note: We had some internal debate about using “Super Bowl” since this is a blog post and not an event for money or an ad. I bet we are not the only ones debating the finer points of trademark and copyright law this week!