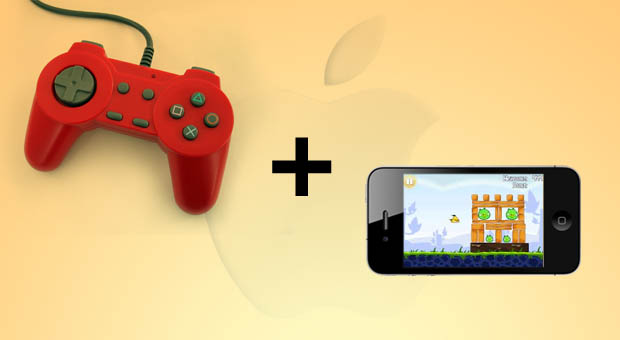 Earlier this week, news broke that Apple had patented a wireless videogame controller for use with its iPhone, iPod and Apple TV platforms. At this point, details about the controller and information on its release are scarce to non-existent. But make no mistake – this is huge news. An Apple game controller has the potential to change the videogame industry, from the games we play to the major players involved.

With casual games – a market Nintendo essentially invented with the Wii, only to see it stolen by mobile devices with titles like Angry Birds – touch screen controls were the gateway entrance for people who found classic game controllers to hard a hill to climb. At the same time, touch screen controls have also been a turn off to the still-large hardcore gamers audience; they just don’t offer the same precision that a controller with a joystick and buttons can. But now that an official Apple controller will be released, there is a chance that the hardcore will spend more time with mobile games, maybe taking a significant chunk of that audience away from console-makers. Not only that, but mobile games may evolve due to the option of the controller, offering a more console-like gaming experience that will appeal directly to the hardcore. It’s something that Sony, Microsoft and Nintendo should be worried about.

Perhaps most importantly, however, is the fact that the controller makes Apple more of a force in the videogame arena than ever before. Fans have wondered why Apple had yet to develop a game console and enter the market, or at least do something. This is that something. The truth is, with the proliferation of mobile gaming via the iPhone and iPad, Apple were surprise entrants into gaming, but this puts them in more direct competition with The Big 3. As videogames move towards a cloud-based future, the controller puts Apple in a position to play a role in the gaming landscape. And if Apple TV is home to console-quality, cloud-based gaming, they could truly change the industry.

That is, of course, if it’s actually released. Time will tell.