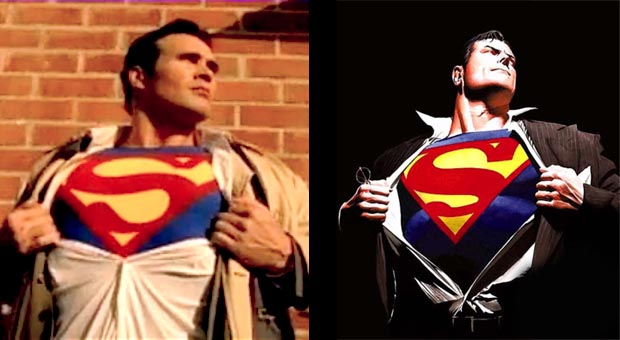 One of the great benefits of the combined emergence of YouTube and DIY digital special effects is the popularization of the fan film: a short movie or fake trailer starring some of pop culture’s biggest IPs, lovingly made (with zero permission from the rights holders) and produced. They often have startlingly good results, nailing the characterizations, beats and feel of the comics, games, books, movies or whatever else it is they’re adapting. Here are some of our favorites.

Batman: Dead End is matched only by the Rocksteady Batman videogames and Batman: The Animated Series in its ability to truly capture the look and feel of the best Batman comics and bring them to life. Directed by Sandy Collora in 2003, it’s an amazing feat of storytelling, action and makeup, as Batman squares off against the Joker, Predator, and another special guest. One of the most popular fan films ever, and for good reason.

Similar in feel to Batman: Dead End, Superman/Batman is a love letter to both heroes. The authenticity here is astonishing; several shots are taken straight from Alex Ross’ artwork, and the titular heroes themselves seem as if they stepped right out from one of the comic book artist’s paintings. The plot is a loose adaptation of the “Public Enemies” storyline, but works in a lot more (the Lois/Clark/Superman love triangle, the interplay and differences between Bruce Wayne and Clark Kent). Great stunts, choreography and building tension. Maybe an actual Superman/Batman movie could work?

PAC-MAN The Movie (The Fan Film) (aka Project Yellow Sphere)

Pac-Man will always be one of the best videogames of all time, but it has never really had any appeal beyond its core gameplay. Which is why this short film, written and directed by James Farr, is all the more incredible. PAC-MAN The Movie is a marvel of special effects and compelling story, presenting Pac-Man as a kind of friendly lab creation (think the Iron Giant in the shape of a small yellow circle that eats pellets and cherries), and his ghost-eating romps are actually training sessions. Somehow, you come out of this dazzled and loving Pac-Man the character, which has never really happened in any medium before, including the games.

The Legend of Zelda

This maybe stretches the definition of “fan film,” as it was made by IGN Entertainment as an April Fool’s prank, but it would be unfair to leave out. The Legend of Zelda: Ocarina of Time, is one of the most beloved games of all time, and the idea of a big-budget film adaptation is actually feasible; the Zelda series is the closest games have come to something like Lord of the Rings. This fake trailer pays loving tribute to the franchise and fans’ ideal adaptation, with the costumes and characters all looking and sounding just like they do in the game, in addition to some impressive looking “bosses.” Too bad it was all a gag, but maybe Hollywood will wise up one day.

No list of internet fan films would be complete without a Star Wars entry. Saber, written and directed by Adam Green, is the story of two women who end up in a lightsaber duel after trying to pick up the same guy. It’s a little risque, but very, very funny, with great editing, reaction shots, and effects – in a way, it captures everything great about Star Wars. Saber deservedly won the 2009 Fan Movie Challenge by Lucasfilm, and a sequel has been announced.