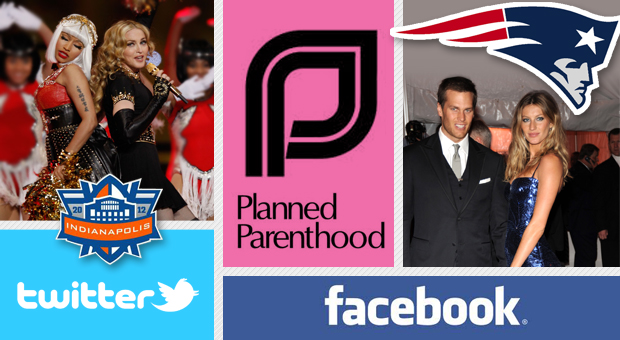 So, within more or less a week, we all got to see the full breadth of living in the viral, social media “activist” world of 2012. Three unmistakable cues to the times we occupy.

Madonna pulls off a stunning Super Bowl half time event complete with historically compelling “people as props” staging and her co-performer M.I.A. flips the bird and mouths off verbal no-nos. The drama didn’t end at halftime, as NBC totally blamed NFL Productions (and vice versa) in a kind of “Human Malfunction” and You Tube is getting page views like crazy – quickly approaching 2 million.

But as Dustin Hoffman’s character in Wag the Dog said, “That’s nothing.” That’s nothing compared to Gisele Bündchen, wife of New England Patriots quarterback Tom Brady, calling out her husband’s teammates for dropping a few too many passes. Yes, she was egged on and yes, it was captured as content and also uploaded to YouTube, where it gained traction. I think the big winner of Giselegate (we know who the losers are) is the guy who got her to make those comments and video it all. He gets drinks for life at any New York bar by just saying “I’m the guy that…”

When Susan G. Komen for the Cure went public with its intention to stop grants of $700,000 to Planned Parenthood because of a “congressional investigation,” Planned Parenthood launched an articulated, highly mobilized and coordinated response that included traditional media tactics – like giving the lead to the Associated Press, ensuring blanket coverage – direct mail to supporters, and a rigorous social component.

According to Opposing Views, “More than 2,000 supporters shared the above email they received immediately on their Facebook wall and on Twitter. Planned Parenthood wrote, “ALERT: Susan G. Komen caves under anti-choice pressure, ends funding for breast cancer screenings at Planned Parenthood health centers.” More than 500 Twitter users retweeted that message.” The numbers and support over social media is astounding: On Facebook, Planned Parenthood has added more than 32,000 fans since last Tuesday; Twitter users sent more than 1.3 million Tweets referencing Planned Parenthood, the Susan G. Komen Foundation and related terms and hashtags, according to a Twitter spokeswoman. This pressure got Komen to change its funding position and gave the VP/strategist behind the move no way out but to resign.

I wrote this blog from the point of view that all three stories couldn’t be more different, yet are similar given the social media forces. People get emotionally into “issue driven” content that is provocative, unscripted, unintended or random – just ask M.I.A. or the now reclusive Gisele. But people really get into content that is agenda based or political (or seemingly so) when it is about people we love or emotional connect to.