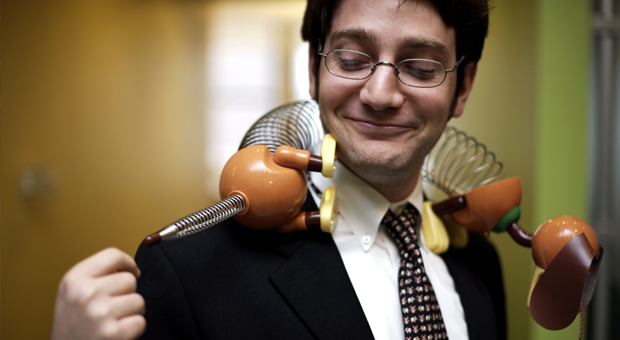 In the final installment of our two-part interview with Jeff Rubin (in case you missed it, here’s part 1), the writer and performer discusses the new College Humor spinoff site, Jest, writing comedy for the Internet, and whether or not we’ll ever see a Street Fighter: The Later Years type sketch for a certain NES game.

Flightpath: What I read about Jest is that it’s aimed at an older demographic. What can you tell us about it, and what does it mean that it’s targeted towards an older demo?

Jeff Rubin: 25-year-olds and 35-year-olds, I think, would find a lot of the same things [funny]. I know for a fact that there are a lot of older people that are on College Humor. But College Humor is always going to be about college, and I think there are some people that will never go to it just because of that. And there are things that are popular online that don’t really fit within College Humor, so we wanted a way to address those.

So what we’re doing with Jest is, it’s a very topical site. We’re still working on this, but we’re trying to develop, conceive, write, shoot and edit videos in 24 or 48 hours, as much as possible. We had an NBA lockout video, we shot something about the iPhone 4S, like the day after it came out. So we’re trying to turn those kinds of things around quickly.

And even other things, like we did this sketch about Gatorade. It’s a commercial for Gatorade, but instead of it being an energy drink that will help you win at basketball – by the way, how clear is it that I don’t know anything about sports where I’m like, “It will help you win at basketball,” that’s what I think energy drinks do – it helps you get over your hangover. It was a funny idea and I think a funny sketch – and even that’s a little College Humor-y – but our sketch was more about getting through the day at work, as opposed to getting out of your dorm room bed and going out to party again. So I think it was a slightly different take on it. You know, we’re doing things that I think people in college would enjoy, but aren’t necessarily made with them in mind.

Flightpath: Going forward now, will you have content or a hand in stuff that shows up on Dorkly and College Humor?

Jeff Rubin: Yeah. Yes, I will. Maybe not as much as I had in the past or at a certain time, but I definitely will continue to contribute to those websites. They’re not gonna get rid of me that easily.

Jeff Rubin: I’ve only ever written for the Internet, so I don’t have much insight. I would say that the rules are a little freer. I feel like we’re free to make up formats. We can make a video that’s one minute and really funny, or we can make a video that’s five minutes and really funny. Where if you’re writing for TV, it has to be 22 minutes and fit into these exact chunks at these spots. I personally find it very exciting that a lot of the rules are still being written. It’s changed so much just since I started working, and I think that’s pretty exciting.

Obviously, there’s things on TV that come along that completely change everything, like Arrested Development. But I think it’s harder on TV because of how much money goes into everything and how long the process is, whereas I feel like we have the chance to really come up with something new and innovate every single day.

Flightpath: So what’s your official role at Jest, and what’s a typical day like?

Jeff Rubin: I am the Editor-in-Chief of Jest. I’d say the site’s new, there’s no typical day yet. We’re still kind of trying to figure out how to keep up with the news cycle and how to best react to it. It’s not hard deciding when to make a video, it’s hard deciding when not to, because there’s something in the news every day. “Is this the thing we really want to focus on this week, or should we hold off?” There’s writing meetings. We try and pay attention to the news and when something comes up, we have that conversation – is this something we should be talking about? And that’s just the original content. There’s this whole other side to the site that is aggregating the best comedy on the Internet and presenting it to you almost like news of what’s funny.

Also, I work a lot on designing the site itself. It’s still very much in beta. There’s, I think, a lot of work to be done in the best way to present this material. So there are a lot of different elements that involve working with a lot of different people. And that’s fun.

Flightpath: Will mixing original and aggregated content be a differentiating factor for Jest?

Jeff Rubin: College Humor aggregates content too. There’s lots of just funny videos on College Humor, and they’re very popular on the site, too. Sometimes we labor for months over a sketch, really working hard on it, and we think it’s great and we’re really excited to put it up. And then a video of like, an elephant shooting water at a baby, blows it away the day it comes out. [Laughs]

But we have a bit of a different take on it on Jest. You can kind of browse by person, or by topic, or by show. Jest also works with Hulu to incorporate more “legit” type of stuff and mix it all up. So when you go to a page for Will Arnett, you get all the funny videos he’s done online, as well as all the TV shows he’s on, which includes both episodes of Arrested Development that are maybe on Hulu, as well as episodes of Up All Night from NBC.com.

Flightpath: Your podcast, The Jeff Rubin Jeff Rubin Show, seems like an amalgam of all the things that you love.

Jeff Rubin: It’s funny. I obviously have a wide variety of guests on. People will comment on the randomness of the guests, but to me it’s not random. It’s all cool stuff! From my perspective, there’s a complete line you can trace through everything, because it’s all just stuff that I’m into.

Flightpath: What do you get from the podcast that maybe you don’t get from your other work on Jest or College Humor?

Jeff Rubin: I really enjoy the medium. The gateway podcast for me, as I think was for a lot of people, was Marc Maron’s WTF Pod. I’d listen to that, and I’d enjoy it. What was remarkable was that I was enjoying it as much as I might enjoy a book or a good TV show, but I was enjoying it in a way that was totally different. The way I was enjoying it was completely unique. I really like the connection I think you forge with people, because it’s not just like a five minute Internet video, where someone’s watching it and as soon it’s over they’re onto the next thing – maybe they don’t even finish it. You’re really in someone’s head for an hour. It’s a much deeper connection. I really enjoy how deep you can get with things. Some are 30 minutes, some of them are an hour and a half, and I think they’re equally good and each one is exactly as long as I want them to be. It can be about whatever. So there’s a lot of fun to be had with it, and I honestly just enjoy doing it.

Flightpath: Now you have a podcast, you’ve written for some very successful comedy sites, you’re active on Twitter. Why do you think the Internet has become such a big destination for comedy?

Jeff Rubin: I don’t think the Internet’s become a big destination for comedy. I think comedy is just always popular. You know, some of the first plays were comedy, some of the first TV shows were comedy. We just have this new thing, and I think as a society maybe, we like comedy and were like, “Well, how are we gonna laugh at this thing?” I think it also doesn’t hurt that everyone’s always on it. Comedy is always tempting and you’re always connected to the Internet, so it’s kind of interesting that you can always find something that makes you laugh.

I actually installed the Reddit iPhone app. Not that Reddit’s necessarily comedy per se, but it’s fun. [Laughs] And I installed the iPhone app today, and I was like, “Oh, well, I guess I’ll never be bored anymore. There’s like a constant stream of interesting things going into my phone at all times.”

Flightpath: Do you ever get tired of the omnipresence of not just the Internet, but the constant connectivity? Like, “You know, I just don’t feel like writing Tweets today.”

Jeff Rubin: Yeah, and you know what I do when that happens? I don’t write any Tweets. I certainly don’t Tweet every day. The podcast, I’m sort of committed to doing weekly, and I treat it like it’s a TV show, but if I didn’t want to do one next week, I could just not do one and it would be totally fine. I like to go camping; I do sometimes feel like, “information overload,” and I try and make a conscious effort to get away from it. But I also embrace it.

Flightpath: Is there anything on Jest we should be looking forward to that you can give us a little preview about?

Jeff Rubin: You know I really can’t, because I don’t know what we’re putting up next week yet. We’re waiting to see the news, which is exciting.

Flightpath: Finally, just since Jest is skewed towards an older demo, does this mean there will never be a Burger Time: The Later Years?

Jeff Rubin: No, probably not. But on Dorkly, which is our videogame site, there’s hundreds of bits, and if there isn’t a Burger Time one yet, it seems inevitable that there will be. It’s totally perfect for that format.